The Mencia grape produces some outstanding Spanish and Portuguese wines. If you’ve never heard of Mencia wine before don’t worry, it’s not the most well-known grape. Pronounced ‘Men-thee-ah’, we thought is was time to give this lovely grape the credit it deserves, so this is our Mencia Wine Guide.

WHAT IS MENCIA WINE?

Mencia is a medium-bodied red wine producing black grape. It’s found in North-West Spain and Northern Portugal, where it is known as ‘Jaen‘. Like Godello (a white grape from the same area), it has previously suffered from Phylloxera, almost becoming extinct in the 1980’s. Traditionally, Mencia vines produced high yields (lots of grapes per vine) which made a diluted, basic, table quality wine.

However, in recent years a new generation of winemaker have been taking old Mencia vines and planting them in more suited hillside vineyards. Through careful vineyard management, winemakers have been able to produce lower yields of higher quality grapes. Their change in approach has resulted in beautiful, fragrant red wines with ageing potential for up to ten years!

Wine made from the Mencia grape would typically be classified as a medium-bodied red wine. It has subtle floral aromas, combined with beautiful fresh red and black fruits like red cherry, strawberry, raspberry, black plum and even a touch of fig.

Taking into account the red cherry aromas commonly found in Mencia, it is a good wine to explore if you like Pinot Noir, Gamay or a cool climate Merlot. The tannins in Mencia will be a little more pronounced due to the warmer climate in Spain and Northern Portugal.

Mencia wine from Spain is produced in two of the Galician DO’s in north western Spain, Valdeorras and Ribera Sacra. It’s also grown in Bierzo, in the Castilla y Leon region. Portuguese Mencia wine is produced in Dão and Beira Interior, where mentioned previously, goes by the name Jaen.

There’s nothing better than opening a fine red wine and pairing it with some good food. With Mencia you need to take into account the notable, yet subtle, tannins. This make it a bit too heavy to pair with seafood or anything with prominent citrus flavours.

The subtle, yet prominent tannins in Mencia wine make it a great pairing with cured or grilled red meat. Hearty vegetable dishes go really well with this style of wine too, and a specific dish that would go well with Mencia wine is mushroom risotto. The creamy texture of the dish, coupled with the meaty texture of the mushroom will help stand up to the wines tannin.

TOP THREE MENCIA WINE PRODUCERS AND WHERE TO BUY

Mencia isn’t the most readily available grape, however in the UK we have a host of great importers bringing in great bottles of wine from both Portuguese and Spanish winemakers.

Naturally, we recommend buying wine that has had sustainable production, following bio-dynamic and organic farming practices. To be honest we really think you can’t go wrong with the Mencia that we stock. However, this wouldn’t be a complete Mencia wine guide if we didn’t highlight wines from other importers, as well as us!

Camino de Cabras is made by winemakers Marina and Santiago who produce some fantastic Galician wines. We love these guys, and also sell their Albariño (Spanish white wine) made from vines planted in Condado do Tea and Val do Salnés.

This bottle has all the hallmarks of well-made Mencia: Delicate tannins, earthy undertones and a vibrant combination of red and black fruit aromas. We recommend enjoying this on a warm summer’s evening, just as the temperature drops with a simple (strong) cheese platter.

Mad for Mencia? Well you can get this beautiful bottle for as little as £11.25 when you subscribe to Savage Vines

Fazend Prádio’s 2017 Mencia is a great example of low-intervention wine making. Nothing is added is added in the fermentation process, apart from low levels of sulphites (which is only permitted to certain levels in organic wine making). That means, no extra yeast, lactic acid or tartaric acid.

Organic winemaking practices helps wine develop its own identity. With the Mencia in particular, expect subtle minerality combined with fresh acidity. It has the classic red fruit aromas of Mencia and is perfect to drink right now.

Palpitating for Prádio? Well you can buy it here!

Our last producer in our Mencia wine guide is Bodegas Martin Codax. They are leading the way with modern approaches to wine making in Bierzo.

This wine is affectionately named ‘Cuatro Pasos’ (four steps) after the bear paw prints that were found in this region. In turn, Bodegas Martin Codax have a commitment to protecting wild bears.

The 2016 Mencia wine is made from grapes that were harvested from 80 year old vines. With this in mind, expect concentrated and rich red and black fruit flavours. It still has all the typical signs of Mencia, but has lovely structure and slightly darker black fruit aromas such as baked plum, figs a touch of date and spice.

Manic for this Mencia? Well our friends over at Rude Wines stock the Cuatro Pasos!

We hope you enjoyed reading our guide to Mencia wine. It really is a lovely grape and is perfect to drink on warm summer nights.

Savage Vines imports wine from small independent vineyards from around the world into the United Kingdom. The wines we source are made by family businesses and by supporting us you are supporting them and that is our mission. Join our wine subscription from £29.95 a month (free delivery) and we will send you two unique, high quality wines which you will not find on the high street or supermarket shelves. Monthly wine subscription boxes come with tasting notes and a podcast talking you through each wine. Monthly subscribers’ also get 25% off wine repurchases. Gift or join the subscription today.

Catalan Wine | Everything You Need to Know 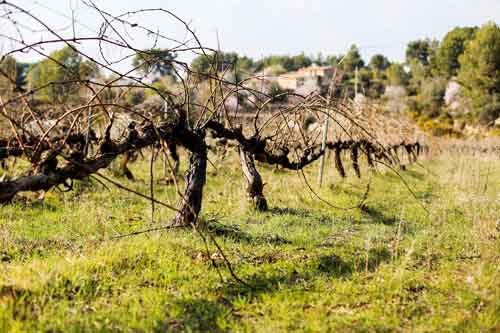